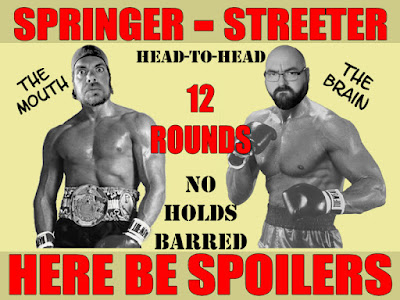 (A Note from Derek: Hey, everybody. As we're all aware, just about everyone is under a Stay At Home order around, so getting new shows out might be kind of spotty until Jake and I can figure out how to do this without having to be in the same room. Options will be discussed soon. Until then, we ask that you bear with us. Also, please stay safe, follow whatever guidelines you're supposed to and wash your hands. We can't afford to lose any listeners!)

Rocky Balboa (Sylvester Stallone) personifies the American Dream; he started from almost nothing, and he went on to become the heavyweight boxing champion. He has a wife (Talia Shire as Adrian), a son (to be determined later), a big ol' bronze statue of himself, and a buttload of money.

But it's not all love and unicorn farts. He also has a brother-in-law (Burt Young as Paulie) that is jealous of Rocky's fame and fortune, and he also discovers that his manager, Mickey (Burgess Meredith), has only been allowing him to fight boxers that are easy to beat. And a wrestler named Thunderlips (Hulk Hogan in his first film role) who folds him up like a duvet cover during a charity match. Oh, and there's a homicidal top-ranked boxer named Clubber Lang (Mr. T) who wants to beat Rocky into a gelatinous pulp, just as the champ was getting ready to retire.

Clubber beats Rocky (and also somehow manages to give Mickey a fatal heart attack), and things are looking bleak. Fortunately, Apollo Creed (Carl Weathers) appears and tries to train Rocky to box like an actual boxer, while Paulie gets really racist and identifies the band Survivor as "boogaloo music." It's a weird movie.

Derek picked this one, and he regrets nothing. Sure, it's the goofiest movie in the entire Rocky canon, but it's so darn fun, and it goes by really quickly. Plus, it give shim a chance to do his Stallone impression, which is adequate, at best.

Jake agrees that it is pretty silly, but still a fun watch. He also gets to break out his Stallone impression, as well as his Mickey and an astoundingly good Clubber Lang! For that alone, you should check out this one, you guys!