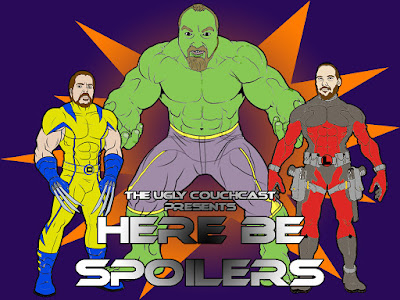 Once again, the guys were unable to have everybody here, as Larry's dad was in town visiting him, so Derek and Jake decided to put John Landis' first film, Schlock, on hold, choosing instead to watch another director's first: Steven Spielberg's 1971 originally made-for-TV movie that was later released to theaters with extra footage, Duel.

Based on a Richard Matheson story, Duel stars Dennis Weaver and almost nobody else, other than a mysterious truck driver whose face we never see, played by Carey Lofton, that is bent on killing him because he had the nerve to pass the truck on a more-or-less empty highway. This film is, essentially, Road Rage: The Movie, and it is mostly scenes of him driving and trying not to be killed by the evil trucker.

Dennis Weaver is David Mann, a guy who is driving home from some sort of business meeting to try keeping his wife (Jaqueline Scott) from leaving him(?) because one of David's friends, in her words, "practically raped" her at a party. Naturally, David is in a hurry to save his marriage, and things are going well until he gets stuck behind a tanker truck that is moving slower than he wants to be. When he passes the truck, the driver takes it personally and decides right then to murder David with his truck. Apparently, truckers were super-sensitive back then.

What follows is a lot of cat-and-mouse chases, stops at a place called Chuck's Cafe (pronounced as one word in the movie: "Chuckskufeh") that results in David getting his ass handed to him due to his own failed attempt to confront the guy he thinks is the truck driver that it terrorizing him, a visit to a gas station/snake farm that ends poorly for all involved, including the snakes, an attempt by David to push-start a school bus full of obnoxious children, numerous interactions with elderly people who don't believe the truck exists until it's too late, and a bunch of teasing by the murder truck as David spends more and more time looking like a concerned Burt Reynolds.

It all boils down to a final face-off between David and the truck out in the middle of the desert. But how will it end? And what's the deal with the trucker? Will he ever wash his truck? It's filthy! Will David make it home? Will his wife stay with him? Will any of these questions be answered?

You'll have to tune in to find out! But don't count on it.

Derek liked it, but it was a bit...empty. He also thought Dennis Weaver looked weird without a cowboy hat on. Still, for Spielberg's first film, it was pretty good. Not as many horror-like elements as he would have expected, but still good.

Jake liked it, and felt that it had an almost Twilight Zone feel to it. He was a little concerned about the addition of the wife's arc, but it was never concluded, so there are too many questions. (See the ones listed above.) Also, the font used in the opening credits was a little too cheerful for this type of film.

So gas up your bright orange Plymouth Valiant, put on your most uncomfortably tight Sans-a-belt slacks, and listen this week's episode!
Posted by Here Be Spoilers Podcast at 9/01/2019 08:51:00 PM