To download, right-click here and choose, "Save file as..." 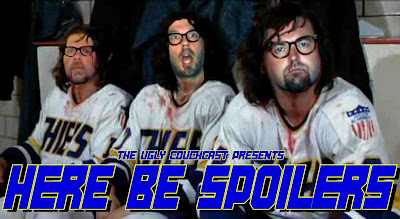 Sometimes you run across something that, despite its horrible and upsetting nature, you cannot help but watch it unfold, and maybe even crack a little smile as you do. Depending on which of the guys you ask, this week's movie might very well be one of those situations.

You see, not everyone believes that a movie where Dolly Parton tries to turn Sylvester Stallone into a country music singer should be the source of any kind of happiness of joviality. (Larry...) However, others might be able to wrangle a few good giggles out of it. ("Hog balls!?")

Anyway, she is stuck in the middle of a contract with a horrible, greasy number named Freddie (Ron Leibman), a guy who dresses like John Travolta's character from Saturday Night Fever, but more...obnoxious somehow. He refuses to let Jake get out of her contract, which is keeping her from becoming the famous singer that she actually is in real life.

If she wants out of her contract, she has two options: First, she could give up her goodies to Freddie. And she's not really keen on that because he is a horrible human being who looks like he probably enjoys deeply inhaling his own farts when nobody is around.

The other option is to win her contract from him in a bet; if she can take your average yahoo on the street and turn them into a legitimate Country singer, she gets to walk. Unfortunately, the yahoo she finds ends up being Nick, a cab driver who is not only not a singer in any way, but also not a very good cabbie, either.

She drags his dopey self down to Tennessee to show him how to "be Country", which largely involves dressing like you are a blind man lost in a costume shop, and having to walk as though you've got a really bad case of jock itch.

While roaming around the Tennessee countryside, Nick runs across Barnett Kale (Tim Thomerson), a former boyfriend of Jake's, and also kind of a douche canoe. Okay, not "kind of". More like "completely and totally".

After two weeks of intense walking lessons, Nick and Jake head back to New York so he can have his big debut, but not before Jake shoots down any hope that he might have of actually being good by not-so-gently telling him that he is not, by any means, an actual singer. To which the entire viewing audience no doubt responded, "Well, DUH."

He does, however, take the stage, and belts out his first song in front of a huge crowd. Will he succeed? Will Jake realize how wrong she was? Will they get together and rub their unnaturally-shaped bodies together to make large-headed, lopsided spawn of their own?

Tune in to find out.

Derek refuses to accept that Stallone will ever be mistaken for an actual human, let alone a singer of any description. (Any description other than "bad", that is.) But he thinks this movie has a lot to offer when you ignore the dead albatross that is Sylvester Stallone. Also, "hog balls?"

Jake also admits that he enjoys a good number of things in this film, none of which are the carcass of a beached whale that is Sylvester Stallone. He also offers insight into just how realistic the hillbillies are when compared against ones that he himself knows and, in some cases, is related to.

Larry hates this movie with a passion that burns with the heat of 1,000 suns. However, some of the songs are catchy, and he even offers up the lynchpin that would make an updated Canadian version of this film infinitely more viable and entertaining than the original. So way to go, Larry!

There's also a bunch of cool stuff in The Lobby (including a shoutout to our pal Billy Brooks), one new movie--AND ONLY ONE--Coming Soon, a lot of disagreement with Larry's List, a pretty flaccid example of Jake-ing Off, and Choose-Your-Own-Adventure Inside My Head!